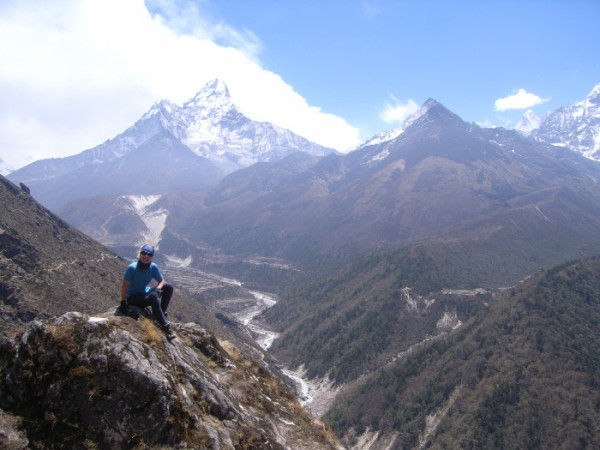 Biography
Cherie Horne is an accomplished high altitude mountaineer and one of Australia’s leading trekking guides, taking novice adventurers to spectacular regions of the Himalayas, Africa and Peru. She has climbed all over the world scaling 5 of the ‘7 Summits of the World’ including the highest mountains in Europe, Africa, South America and Australia.

In addition to her guiding talents, Cherie is also an experienced high-performance coach, motivator, altitude training specialist and a former junior world-class middle distance runner; having trained at the AIS and won national titles over 3,000 m and 10,000 m

Cherie is an exceptional motivator and communicator who has a unique ability to inspire ‘ordinary people’ to explore their potential, overcome their fears and achieve extraordinary things.

“Join me in a life of personal challenge, inspired adventure, positive health & fitness!”

In my own words…

I was born in Melbourne, 1976. Earlier than expected, 2 months premature in fact. I guess l was just eager to see the world…and things haven’t changed much 38 years later!

I was brought up in the outer eastern suburbs of Melbourne on my Dad’s flower farm, which provided me with the freedom and open space that l love. I attended Upper Ferntree Gully primary school and secondary school at Knoxfield College, Wantirna South. I enjoyed school and learning, was an extremely conscientious student who performed very well academically. Physical education and health were my favourite subjects.

Sport dominated my life from an early age. Having 3 older brothers and active parents meant l was far more accustomed to kicking the footy, playing cricket and riding a motor bike than playing with my dolls. I enjoyed a variety of team sports such as netball and hockey and it wasn’t until grade 6 that athletics came into my life.

I was also introduced to drama and music as a teenager, initially as a way to overcome my shyness. I soon enjoyed the challenge and it wasn’t long until l was selected as one of the main roles in the school musical production. This role included singing solo to an audience of over 500 people. What wonderful memories that instilled so much confidence in me! I then joined an acting academy and took part in other productions external to school.

It was not long after my creative talents were discovered that l had to make a big decision – do l concentrate on acting and singing or my sport?

I chose the latter, in particular running. This was the beginning of my “Olympic Dream”. In 1988, as a 12 year old while watching the Seoul Olympic Games, l decided l wanted to become a champion athlete. I set myself a goal which l wrote on my bedroom wall – “Australian Olympic running champion.”

It was the very next day that l began training myself by running laps around the local footy oval after school. I was on a mission, so dedicated and determined to become an elite runner and represent Australia at the Olympics. I would play the official Australian Olympic theme song on a daily basis along with all my “Rocky” music as a way to motivate me.

I joined Knox Athletics Club and focused on the middle distance events, particularly 1500m. I still recall watching the women’s 1500m race with a stopwatch in my hand working out how much faster l needed to run to be at Olympic standard. Ironically, it was around the same time that l recall saying to my father that l also want to climb Mount Everest one day! I guess l have something deep within me that thrives on a challenge that demands the pursuit of excellence and determination!

Within 6 months of joining Knox Athletics Club l was competing in regional events around Melbourne and within 12 months, State championships. After less than 2 years, l won my first my first Victorian title. This was followed by 3 Australian junior titles in both track and cross country 3000m events. In addition to this, l ran 34min for 10,000m which was reported in Melbourne’s Herald-Sun newspaper, by Nick Bideau as a world class time for a junior athlete.

As one of Australia’s most exciting junior athletes l was part of the elite junior development squad and spent time at training camps at the Australian Institute of Sport. My “Olympic Dream” was right before my eyes and as Nick Bideau’s article stated – “on record pace”.

Unfortunately, leading up to the Sydney 2000 Olympic Games, l was plagued with chronic injuries that prevented me from qualifying in Olympic trials. I was forced to have hip surgery and a decision was made by my supportive medical team to retire from competitive running. My “Olympic Dreams” were shattered and l hadn’t even reached my full potential as an athlete!

My Olympic Dreams on record pace.

Watching the Sydney Olympics was so incredibly hard for me, the heart-ache indescribable! It took me at least 4 years to get over the disappointment of unfulfilled dreams as l worked so hard and sacrificed so much from an early age. That heart-ache will always be there but not to be dwelled upon, but used now as a motivation to find greater challenges that inspire and motivate me.

During this period l gained qualifications as a Sports Massage Therapist and also an Operating Theatre Technician. I worked at Melbourne’s Cabrini Hospital for 3 years. I then needed a change from the life of rotating rosters in the operating theatre and worked for 3 years with children and adults with learning difficulties. This rewarding work was based on a motor-orientated exercise program that remediates part of the brain involved in coordination and movement – the cerebellum.

At present l am self-employed as a Mountain Trekking Guide, High-Performance Coach, Third In Charge, and gear-tester at Kathmandu Outdoor and Equipment Stores.  It doesn’t get any better than that!. 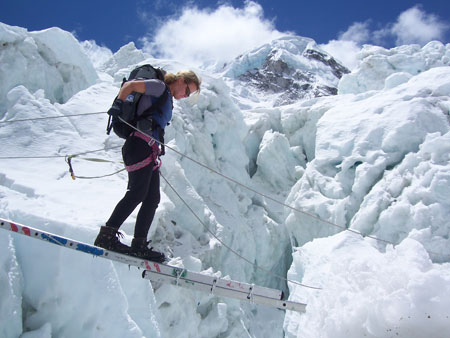 After my retirement from running l had to look for other interests in order to keep my mind and body healthy . Something that wasn’t going to put the repetitive stress on the body as elite running did. I joined The Melbourne Bushwalking Club and became a regular on weekend walks across Victoria. I instantly developed a love for the outdoors away from the running track. I immediately connected with the freedom, simplicity and beauty that bush walking offered. It wasn’t long until l started leading weekend walks, including extended walks in Tasmania.

The pain and disappointment of running was slowly subsiding as a new passion and love was discovered. In 2004, l read an article on 3 Victorian Police officers who planned to climb Mount Everest in honour of their mate Paul Carr, who died on a training climb the year before. The team was offering corporate involvement in training programs leading up to their Everest Expedition. Within minutes of reading this article l was on the phone making enquires about possible involvement as an individual.

My enthusiasm and interest was acknowledged and l was honoured to be accepted by the Victorian Police Everest Team (John Taylor, Nick Farr & Greg Linsdell) as a support/training member. I trained with ‘JT’ (John Taylor) weekly and took part in all of the preparation programs that included a five day expedition to Mount Feathertop, 4 days in Victoria’s beautiful Grampians and 8 days walking Tasmania’s Cradle Mountain Overland trail. The last phase involved walking with the men and their family to Base Camp Mount Everest.Given the great friendship l developed with the team and their families l decided to support them for the entire duration of their expedition at Everest Base Camp (5364m). This involved 10 weeks at the foot of the world’s greatest mountain range – the spectacular Himalayas.This was ‘home’ for me while the men prepared for one of the greatest human challenges on earth – to climb 8850m above sea level to the highest part of the world, Mount Everest!

It was during the lead up and time spent at base camp that l developed a very special friendship with documentary maker, Jennifer Adams, (former channel 7 newsreader). I supported Jen, as a camera assistant in the making of her documentary “Unfinished Business” which tells of the Victorian Police Everest Team’s climb of Mount Everest in honour and memory of their mate. My friendship with Jen and John “JT” Taylor continues today as a result of the Everest expedition.

My time in Nepal was the most amazing, life-changing experience l had ever had. It was where l fell in love with the mountains and decided that mountaineering was to be my next goal. Waking up each morning in the most barren, uninhabited part of the world, with spectacular scenery was totally inspiring and extremely motivating. Mount Everest was right in front of my eyes every day, it totally captivated me…….rather like a magnet that l was drawn to!

It was also the most devastating moment of my life. On the day the men successfully summited Everest, May 31st, 2005 my dear late father, Tony informed me via satellite phone that he had terminal brain cancer.

It was the most profound moment of my life, a complete dichotomy of emotions. I experienced the greatest ‘high’ (when the men achieved summit success) and the most earth-shattering ‘low’ when my father informed me of his cancer diagnosis.

That was the beginning of a long and painful battle with terminal brain cancer which I nursed my dear father through until the very last night of his life. Not a day goes by that I don’t think of him. My love grows stronger for my father each day and I live my life in honour and memory of Tony Horne. I love you Dad xx 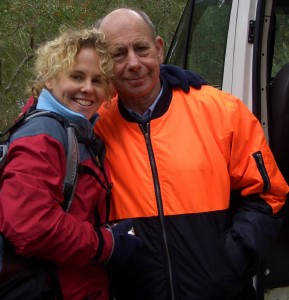 My greatest inspiration and best friend, my late father, Tony

I made the most of my time at altitude and trained hard each day, many people commented that l should be climbing Everest with the men. I also developed special friendships with the beautiful Nepalese people – the Sherpa’s of the Himalayas. I found them to be the most extraordinary people l had ever met with values and a way of living all people should explore. Funnily enough, l have been given the nickname “Sherps” as a result of my strength, endurance, and happy demeanour…….what an honour!

It was during my time at Base Camp Everest 2005 that l decided l wanted to climb Mount Everest and the other six highest mountains that make up the “Seven Summits of the World” – the highest mountain on each continent of the globe! 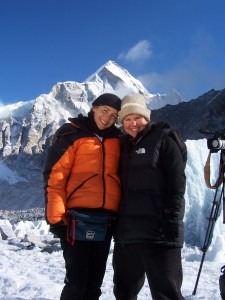 My special friend, Jennifer Adams and I during an early morning filming break at Everest Base Camp 2005.

That was the very beginning of my “7 Summits Dream.” – 5 mountains completed….2 remaining.

Please click on The 7 Summits and find out about the mountains l have climbed and the plan for the remaining summits. 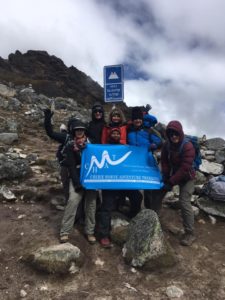 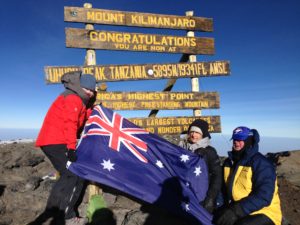 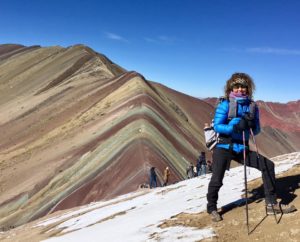 However, due to the global COVID-19 pandemic travel has been stalled indefinitely.
In the meantime, my passion and dedication is focused on working full-time as Third In Charge (31C) and Gear-tester at Kathmandu Outdoor and Equipment Stores where I  can serve, educate and inspire people to reach their potential, achieve their dreams, and spread the message of “improving the wellbeing of the world through the outdoors.” 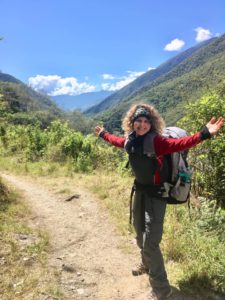 I hope you visit one of the great Kathmandu stores soon!
Take care
Cherie

“I’m going to fly from my cocoon, put my footsteps on the moon. All l ever hoped to be…..is free, that person me.”