The highest mountain on each continent of the world. 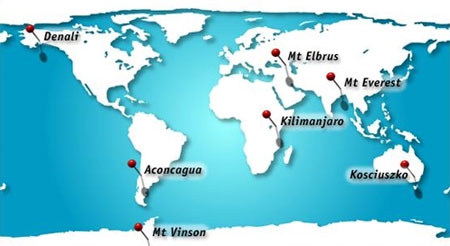 My goal to climb the highest mountain on each continent of the world is a challenge very few people dare to embark upon. It has captured my imagination, inspired and motivated me. I believe, it is one of the greatest human pursuits of physical, psychological, emotional and spiritual strength. My journey is under way….I’m over half way there!

Mount Everest is one of the Earth’s great treasures, considered sacred by untold numbers of people, especially the Sherpas, without whom the summit of Everest would have remained an impossible dream for climbers around the world.

The ultimate challenge of the Seven Summits. Everest is a massive three-sided pyramid with the South West Face in Nepal, and the East and North Face in Tibet. It towers above the neighbouring mountains of the majestical Himalayas. Known as Sagamartha in Nepal by the Sherpas and Chomolungma, “Mother Goddess of the World” by the Tibetans, this extraordinary mountain rises to a maximum altitude known as “death-zone.” Everest’s extreme height and variety of difficulties requires a tremendous amount of courage, determination and strength that will push all climbers to their limits.

The second highest of the Seven Summits outside of the Himalayas. This wedge-shaped, “Stone Sentinel” is located in Western Argentina and lies in the heart of the Central Andes. The extreme cold, stormy winds and high altitude makes this mountain a serious undertaking. Despite being non-technical in nature it is often used as a preparation climb for the big mountains of the Himalayas.

The spectacular Mt McKinley, known as Denali, “The High One” by Alaskan native people, is a mountain of impressive proportion and extreme temperatures (can be -40degrees Celsius at night). It represents a vertical gain measuring 6000m/20,000ft from foot to summit. It lies south of the Arctic Circle rising above the rugged Alaskan plain, 240km north of Anchorage. A beautiful, challenging and dangerous mountain in the heart of Alaska, is one of the most sought after Seven Summits.

Kilimanjaro is one of the best known mountains of the world, located just inside Tanzania’s border with Kenya. It is the highest free standing mountain in the world, comprised of 3 separate extinct volcanoes – Kibo, Shira and Mawenzi. Kibo being the highest. The mountain has striking presence, rather like an island standing tall by the hot, dry plains of Africa. At the highest elevation is a zone of permanent ice and snow that is responsible for the name which in Swahili, means “The Mountain that Glitters.” A non-technical climb of reasonable altitude through contrasting vegetation and captivating wildlife is an true adventure of magnificent African beauty.

This magnificent two-headed dormant volcano is situated in the war-torn Caucasus Mountains, between the Black and Caspian Seas at the Southern edge of Russia, bordering Georgia. The local name means, “Resembling a Thousand Mountains” due to the size. Elbrus has two summits – the Western summit higher than the Eastern. Whilst the climb is technically straightforward, it is a mountain that must be respected which contains over 70 glaciers worth of ice.

Antarctica’s highest mountain lies deep within the frozen Sentinel Range, Ellsworth Mountains, 1200km from the South Pole. Vinson was the last discovered mountain of the continental summits, situated in the unforgiving environment of the frozen Antarctic region. It provides extremely dry and cold conditions, devoid of all flora and fauna. The snowfall in Antarctica is so minimal that the continent has been called “The World’s Coldest Desert.” The climb is not technically difficult but a challenging and magical experience of Antarctica’s interior.

Kosciuszko, without question the easiest of the continental summits is situated in the beautiful Snowy Mountains of New South Wales and is part of the Great Diving Range. Australia has no glaciated mountains, unlike the other mountains that make up the Seven Summits, but is the highest point in Australia. For that reason alone, makes it one of the famous mountains of the world to climb. It is more like a rise on the high rolling hills of the “Australian Alps”, described by Dick Bass, (the first person to climb the Seven Summits) as, “a walk in the park.” However insignificant it may be, it is part of my beautiful country that l am proud to call “home.”

N.B: There is much debate over whether Kosciuszko is in fact one of the Seven Summits. Many argue that Carstensz Pyramid, in the jungle of Irian Jaya on the island of Papua New Guinea, Indonesia, represents a more worthy continental peak than Kosciuszko. This is assuming that Carstensz Pyramid, is the highest mountain on the Australasian continent.

The discussion still goes on regarding these two mountains of dispute and for that reason Carstensz vies with Kosciuszko for its Seven Summits title. The Seven Summits statistics contain 2 lists – The Kosciuszko & Carstensz list of summiteers.

I consider Australia’s Kosciuszko, as the mountain that makes up the famous Seven Summits of the world.